Worldwide, people’s attachments to places are typically ambivalent, and complemented by desires for mobility and scene-changing. So to understand relationships between place and wellbeing, we need to look beyond the simple idea that some kinds of place, local characteristics and place attachments make people’s lives go better. Places matter, but wellbeing is not environmentally determined, it is a complex outcome of lifelong interactions between people and places. Some of these are conscious and deliberate, and some involve deliberate relocation as well as processes of attachment. This article supplements the environmental determinism of ‘good place’ theories, and the social constructionism of ‘healthy place attachment’ theories, with recommendations for a systematic approach to mapping and analysing how wellbeing happens. It pays particular attention to deliberate ‘place appreciation’, which refers to these dynamic interactions through which people actively derive value from places. Ethnographic examples of deliberate ecological self-improvement in later life are explored to highlight three kinds of place-related wellbeing strategies: place-making, local mobility and relocation. A simple analytical system is proposed to highlight the potential relevance to policy and practice of a systematic sociocultural ecology of wellbeing. 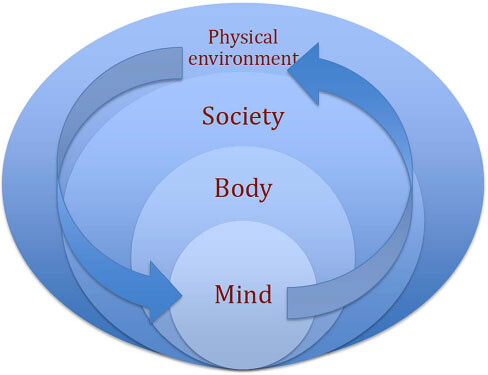 A dynamic interactionist model of how wellbeing happens