Sheikhs and the City

This article examines the rise and fall of the “Assir movement,” a neo-Salafist campaign led by a charismatic local sheikh who, after years of community activism, rose to prominence in the wake of the Syrian uprising (2011–present) protesting the Sunnis’ political decline and disempowerment. To understand the Assir movement's popular appeal, it is necessary to examine the pathways of contention in specific urban contexts and the extension of Salafism to secondary cities such as Sidon, where Sheikh Ahmad Assir's neo-Salafism became a political force and can be classified as a new social movement. Neo-Salafism combines populism with sectarianism, and this accounts for its widespread support after 2011, when the Syrian uprising increased Sunni-Shia tensions and shifted the locus of contentious politics from the capital, Beirut, to Sidon, a Sunni-majority city and the seat of the Assir movement. Ultimately, this led to an armed confrontation that crushed the movement, eroded its popular support, and was followed by an electoral defeat in which local elites reasserted control.

The city of Sidon, with Abra and adjoining municipalities and Palestinian refugee camps (map courtesy of Chr. Michelsen Institute). 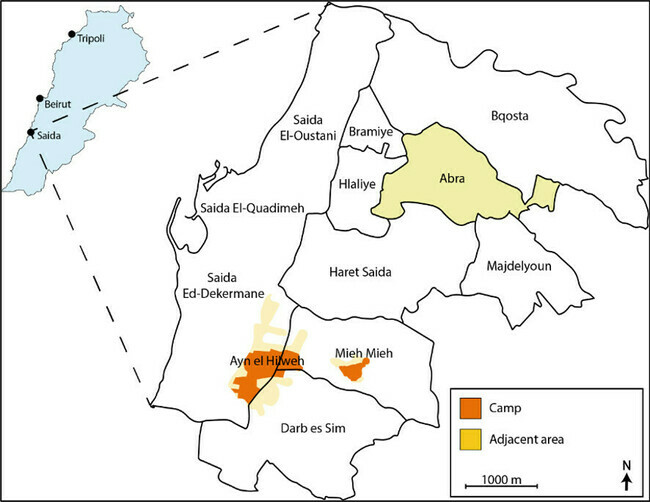 Mediterranean Basin Wetlands as a Vertebral Axis of the Territory

Within the framework of the new environmental history, this article focuses on the interaction between historical human societies and a given natural environment. Specifically, we study the spatial relationships between wetlands, Roman roads, and contemporary livestock trails, with the aim of verifying the role of wetlands as a support of territory planning since antiquity to the present. The documentation used includes geographical and ecological manuscripts together with ancient sources (texts, archaeology). Our results demonstrate an overlapping that remarks the importance of wetlands in the study area’s territorial ordering during various historical moments. This result also opens the possibility of applying this reality to others parts of the Mediterranean region with the same climatological conditions and a similar history. The clear heritage value of the wetlands are compelling enough to take the necessary protection measures for their conservation in the face of the growing threat of their deterioration and disappearance.

Are “the Natives” Educable?

This article explores how geography textbooks and missionary stories were used to persuade Dutch primary schoolchildren of the moral righteousness of the Ethical Policy for the Dutch East Indies between 1890 and 1910. Educative discourses targeting Dutch children were instrumentalized in order to recruit the next generation of missionaries, colonial administrators, and overseas entrepreneurs. To achieve this aim, they dwelt at length on the opportunities for and constraints on uplifting indigenous children in the Indies. These narratives all convey the message that Indies children, though certainly capable of improvement, would never attain the same level of civilization and moral integrity as their Dutch counterparts.

What They Mean, How They Work

In previous work I developed an account of truces focused on 'truce thinking' – the moral and psychological commitments made by those who seek to manage and reduce conflict rather than permanently end it. In this article I further develop that theory by placing truce thinking in conceptual context and by exploring a case study. Part 1 rehearses the main features of truce thinking. Part 2 situates it against the related concepts of political reconciliation and containment. Part 3 takes up Spain's transition to democracy as an example of how truce thinking works in practice.

English abstract: Green Belts are often proposed as an alternative for containing urban sprawl, restoring ecological processes, recovering connectivity, and maintaining the multi-functionality that cities need. This article analyzes a proposed Green Belt for Xalapa, Veracruz, Mexico. It is spatially examined through GIS analysis and designed on the notion of Garden City as a strip to circumvent the city. Existing conditions are also discussed. Two existing conservation initiatives are compared to the proposed Green Belt strategy. Its establishment requires agreements between Xalapa and surrounding municipalities. The proposed strategy brings local government and citizens together to preserve the remaining vegetation and thus promote the well-being of local inhabitants.