Free access
Rabbi Dr Nathan Peter Levinson, born Levinski, grew up in Berlin, and after his Abitur began, in 1940, to study for the rabbinate at the Lehranstalt fuer die Wissenschaft des Judentums, then under the leadership of Rabbi Dr Leo Baeck. In his autobiography, he describes the experience of studying there as a haven despite the horrors outside of the Nazi regime.

It is difficult for me to write about my state at the time and the atmosphere at the Lehranstalt. From today’s perspective, it seems so unreal, so spooky. Because when I try to account for this period, I have to say that I was happy. Not only that I still have a longing for it, just once to be a student at the Lehranstalt, to hear Baeck’s lectures, to prepare myself for the profession of a rabbi – I have never again in my life been able to work amongst such a like-minded and goal-oriented group. We discussed for hours and days long, at least until shortly before nine o’clock, because after that time no Jew was allowed to be on the street. Of course, we were not naïve, we knew of the danger that surrounded all of us and constantly threatened us, but nevertheless we lived as if on an island. What I mean is that this experience demonstrated what Jewish life, Jewish learning had always meant: despite everything to survive because one escaped into the world of learning. Because, in the last analysis, everything else outside was not truly real. Because Torah is a piece of eternity, and those who engage with it have a part of it. Therefore, of course we took the world with its horrors seriously, but our refuge, the Lehranstalt, was more important; there we were at home, and in the end, there we were sheltered. And when we thought about it, that Baeck, as Chair of the leading committee of German Jews, bore the vast burden on his shoulders and was almost daily confronted by the Gestapo, and yet brought nothing of this into these sacred halls, then one understood what it meant even here, to make a fence around the Torah.1

On Baeck’s urging, when the last possible opportunity to escape arose, Levinson left with his parents, without the necessary visas, on one of the last trains east out of Berlin. Friends who had stayed up all night in embassies threw the papers through the window into the train, and they left on a journey that would take them through Poland, Russia, Korea and Japan, to America. There at the Hebrew Union College he completed his rabbinic studies.
In 1951 Leo Baeck persuaded him to return to Berlin as a rabbi, which he did under the auspices of the World Union for Progressive Judaism. In his autobiography, he writes about Baeck’s subsequent visit to Berlin:

For me the impression remains of Baeck once again in the pulpit of a Berlin synagogue. The patriarch of German Judaism, the towering Jewish spirit of our century, the one condemned to death who once again had taken his place – he was for me the symbol of the indestructible Jewish spirit, the victory of Torah over annihilation and death.2

Rabbi Levinson’s description above of the two elements that dominated his experience during his time at the Hochschule, the power of study and the terrible events in the outside world, may have had their echo in two events that marked his rabbinate in Germany. Recognizing the dangers of the anti-Jewish campaign in the Soviet Union, he argued that Jews should be urged to move from East Germany to West. The leadership of the community disagreed, but despite this he arranged a press conference and was warned by the head of the community of dire consequences if he spoke. Nevertheless, he did so, and, as a result, a considerable number of Jews from East Germany left for the West. Even though the same community leadership published a similar advice a few days later, he was fired from his post on the spot. Returning to the States, he spent a year as a rabbi in Selma, Alabama before becoming a military chaplain, serving in Japan and then in Germany. On leaving the military in 1961 he began a distinguished career as one of the few ‘liberal’ rabbis in Germany, serving as a community rabbi in Mannheim, and from 1964 as Landesrabbiner of Baden. He served as Chairman of the German Rabbinic Conference and had a popular, regular radio slot. Already in his early period in Berlin he studied at the Institute for Psychological Illness and later sat on the advisory board for training in practical psychology.

Throughout his ministry in Germany he played a central role in interfaith dialogue, becoming the Jewish chair of the Koordinierungsrat der Gesellschaft für Christlich-Jüdische Zusammenarbeit, and from 1976 President and then Vice President of the International Council of Christians and Jews (ICCJ). During this period the headquarters was moved to Germany, and Rabbi Levinson convinced the German authorities not to demolish the former house of Martin Buber in Heppenheim where the new headquarters was subsequently located.

The second echo of his Lehranstalt experience was his initiative that led to the successful establishment of the Hochschule für Jüdische Studien in Heidelberg. Sadly, he was unable to achieve his hopes that it would become as well as an academic institution a seminary for the training of rabbis. He collaborated with London colleagues of the Leo Baeck College, Lionel Blue and Albert Friedlander, and brought young German Jews to conferences of the Youth Section of the World Union for Progressive Judaism and encouraged some to study at the College for the rabbinate.

His first wife Helga died tragically young from cancer, shortly after completing her studies in medicine. His second wife, Dr Pnina Navé-Levinson (1921–1998), an Israeli-born scholar in Jewish studies, who had collaborated with Martin Buber, shared with him his many leading activities in the difficult areas of interfaith activities and German-Jewish postwar relations. After his retirement in 1985, the couple settled in their two homes, in Majorca and Jerusalem.

If helping to rebuild Jewish life in Germany after the Shoah needed faith and courage, affirming the Christian-Jewish dialogue from within Germany has been an act of faith few of us can hope to match. This faith shines through when he opens our sessions with prayer. And when at times his brief bursts of anger at perceived injustice are quickly replaced by evident efforts to seek the path of integrity and peaceful solutions then I for one am grateful to have such a man as my friend.3 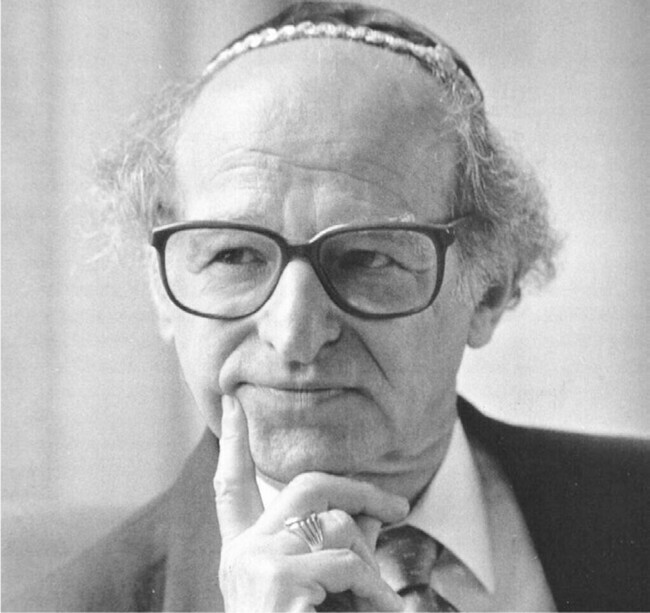