The eleven articles in this issue of European Judaism reflect the social and religious culture of Moroccan Jews set against an ever changing backdrop of persecution and conflict, interaction and cohabitation. Ranging from Berber Jews to forced converts, scholars, courtiers and artisans, Moroccan Jews were constantly under threat. Despite this unstable situation, they produced literary and religious works in Hebrew, Judeo-Arabic and Judeo-Spanish as well as creating distinctive life-cycle customs, songs and a highly skilled material culture. While the Jewish community of Morocco is today considerably reduced, Moroccan immigrants in Israel, France and the Americas keep the memory and identity of Jewish Morocco alive.

This issue of European Judaism contains a selection of papers delivered at a conference on the Jews of Morocco held under the auspices of the Institute of Jewish Studies, University College London, in 2011 plus three specially commissioned articles (Sabar, Moreno, Sekkat). They mirror various aspects of Jewish life in Morocco, a country noted for both its geographical and historical diversity.

The history of the Jews of Morocco spans some two thousand years, which Norman Stillman succinctly sums up in the opening article. From pre-Islamic times until the present day, Stillman defines the position of Moroccan Jews in a country noted for the turbulence of its politics. Once the largest Jewish community in a Muslim land, reduced to a mere couple of thousand today, the varying condition of Jewish life is put into perspective, emphasising the continuous trade and scholastic links with al-Andalus, Muslim Spain, and the rich interchange of ideas.

Stillman points out the presence in Morocco of a Jewish courtier elite, close to the royal throne. This has continued until the present day, as personified by King Muhammed's close advisor, André Azoulay. That urban elite owes much of its status to the arrival and growth of the network of Alliance Israélite Universelle schools in the second half of the nineteenth century. Thanks to their familiarity with the French language, Jews could henceforth adapt to the French Protectorate established in 1912, although a substantial proportion of Moroccan Jews continued to live in straitened circumstances. Stillman's article concludes with an overview of the circumstances of Jews once Morocco gained independence in 1956 and a summary of the situation today.

The findings of Joseph Chetrit's many years of field work are outlined in his analysis of social, economic and cultural interaction between Jews and Berbers. Chetrit concludes that despite their often physically intimate coexistence living in the same urban and rural quarters and despite economic cooperation, shared beliefs and customs, Jews continued to be considered as the Other, but protected as Dhimmi in rural and urban areas. Chetrit notes, however, present-day nostalgia for, and even a romanticised memory of, that shared past.

The fate of Moroccan Jews who converted to Islam, particularly under the harsh regime of the Almohads and during subsequent intolerant regimes, is discussed in Paul Fenton's analysis of crypto-Islam. Fenton demonstrates how the treatment of New Muslims by Old Muslims was as unrelenting as that of New Christians in Spain, and how the descendants of bildis, New Muslims, have continued to be identified as such and considered to be lacking purity of blood. The sincerity of their conversion has been doubted and they have been treated with persecution, scorn and distrust.

The arrival of Spanish Jews after the pogroms in much of Spain in 1391 and following the 1492 Expulsion was to have a far-reaching effect on Jewish life in Morocco, and the next four articles study Spanish acculturation and its consequences. Moisés Orfali discusses the manner in which the statutes or regulations (Hb., takkanot) that had been drawn up in Valladolid in 1432 and first implemented in Morocco in 1494 governed Jewish life in the areas where Spanish Jews settled. These statutes imposed various changes on the original Jewish community (Hb., toshavim), with particular importance being placed on kashrut practices, marriage, the status of women and the need to avoid excessive ostentation. Orfali also discusses the extent of Spanish Kabbalah in Morocco and the role of Spanish in defining the Sephardim.

Shalom Sabar's detailed discussion examines the survival of various forms of Iberian material and visual culture in Morocco. These include illuminated manuscripts and the exquisitely decorated marriage contracts, various synagogue appurtenances all of which reveal their origin in Iberia and the, sadly, short-lived Hebrew printing press. As with Moisés Orfali's article, Sabar explains how the role of women in Sephardi households was honoured and protected.

While Sephardi Jews were fewer in number than the original Jewish population of Morocco, Sephardi influence was considerable. The Sephardim made a significant contribution to religious and legal practice and to material culture and brought with them their language, Spanish, which would develop its own distinctive form, Haketía, containing numerous Moroccan Arabic elements, as well as the oral literature, so popular in fifteenth-century Spain. Hilary Pomeroy's contribution studies the survival in Morocco of medieval narrative ballads from Spain and how, while remaining faithful to the medieval Spanish texts, ballads acquired an additional function to that of disseminating news and providing entertainment by acquiring a para-liturgical role. Pomeroy also discusses the early twentieth-century notebook collections that act as permanent testimony of this ephemeral tradition.

There follows a study of Sephardi wedding songs by the ethnomusicologist Susana Weich-Shahak, who has devoted much of her career to collecting in Israel the songs still being sung by women of Moroccan origin. Weich-Shahak describes the characteristics of these songs, explaining their symbolism and place in the complicated sequence of rites pertaining to Moroccan Sephardi wedding celebrations.

Whereas Spanish acculturation only affected northern Morocco, French influence was to be found through much of the country, although some remote rural areas remained impervious to French power and acculturation during much of the French Protectorate years. With the establishment of Alliance Israélite Universelle schools in 1862 and their rapid advance throughout the country, Jewish communities gradually began to benefit from the modernisation and westernisation processes that the AIU introduced. Michael Laskier provides a detailed account of the political situation in Morocco and its effects on the Jewish communities in precolonial Morocco, during the Protectorate (1912) and after Independence (1956). He quotes the reaction of foreign travellers to the pitiful plight of the Jews and analyses the effects brought about by the French education and adoption of the French language that enabled Moroccan Jews to advance socially.

There follow two articles describing the condition of Moroccan Jews in parts of the Moroccan diaspora, namely Canada and Israel. Henry Green introduces Sephardi Voices, an archive of audio-visual histories of Jews from Arab lands, and proceeds to describe the often difficult experiences of Moroccan Jews trying to integrate into Jewish life in Montreal. In Israel, Moroccan Jews were initially considered to be poor and even backward. Aviad Moreno describes the setting up of MABAT, an association for Spanish-speaking emigrés from northern Morocco, the reasons for its establishment and the advantages of continued links with Moroccan diasporas abroad.

Finally, Hanane Sekkat analyses the growth of Jewish tourism to Morocco, especially the increasing number of Israelis of Moroccan origin who visit their homeland in order to reconnect with their past. Sekkat points out that this growing industry, which has been greatly encouraged and supported by the Moroccan state, is not only for nostalgic reasons but for political and economic ones. These are of benefit to Morocco as the Israeli tourists in a Muslim land become, to a certain extent, ambassadors for Morocco.

In conclusion, I would like to thank all the contributors to this issue and, above all, Jonathan Magonet, the editor of European Judaism, and Jenny Pizer, the managing editor, for their encouragement, support, patience and generous comments. Thanks also to the photographer Marion Davies, whose exhibition ‘Glimpses of Jewish Morocco’ was displayed during the 2011 conference.

The Berber synagogue in Arazane, near Taroudant. Photograph by Marion Davies. Published with permission.

The entrance to the mellah, Essaouira. Photograph by Marion Davies. Published with permission.

Graves stones and a shrine in the Jewish cemetery, Fez. Photograph by Marion Davies. Published with permission. 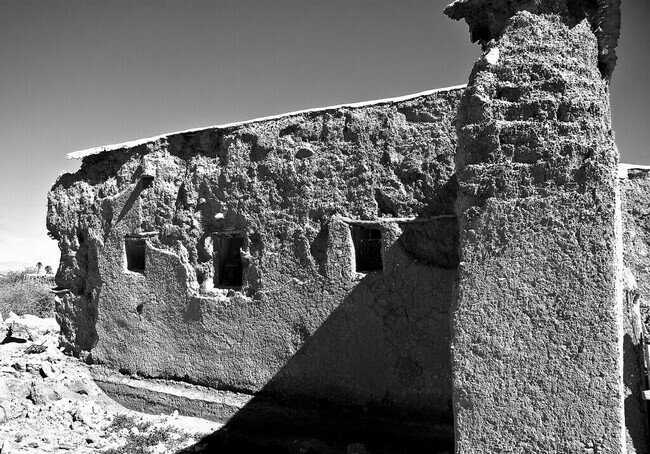 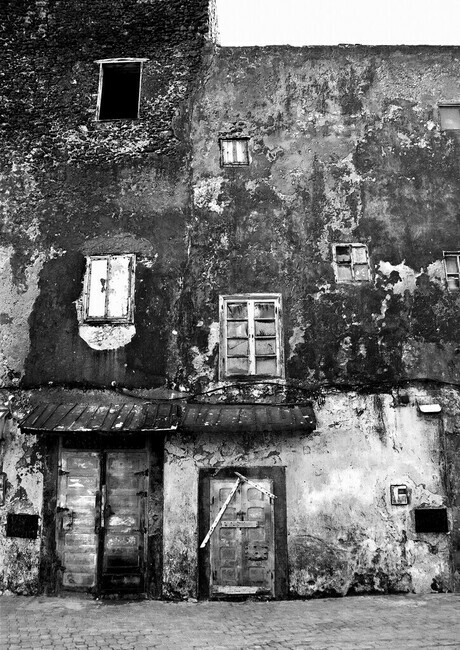 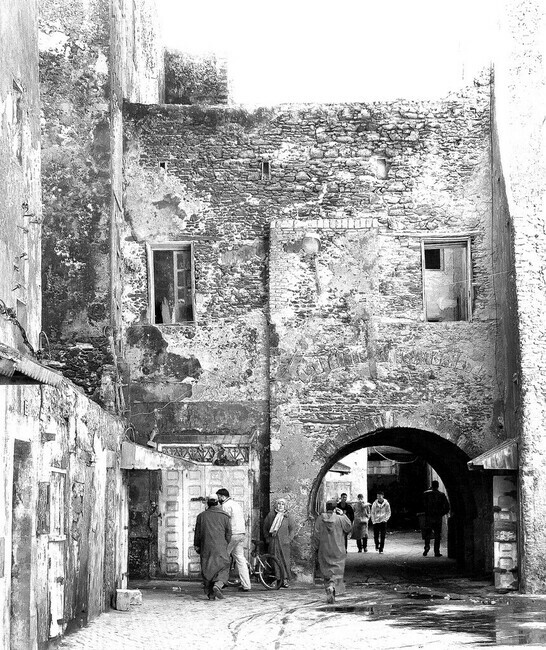 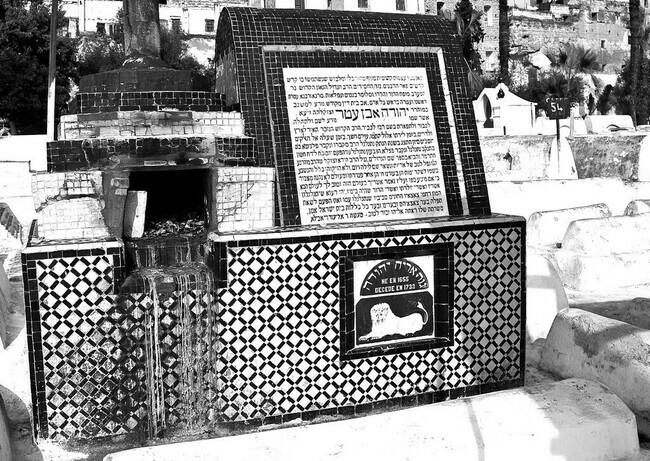