White currency in the gentrification of black and Latino Chicago

In Chicago, real estate value is fixed by race through the process of gentrification. I present findings from an ethnography of the black, Mexican, and Puerto Rican neighborhoods of the greater West Side. Gentrification here is a “racial fix”: a consensus-building process to inflate value in a speculative market reliant on the historical legacies of racism. The white flight era devalued neighborhoods now facing speculation and hyperinflation as increased global investment, debt culture, and debt financing fuel the growth machine. The discourses of residents, randomized survey results, and a built environment scan show that property value corresponds more to white residence than material improvement. White people cultivate the currency of whiteness through gentrification to build social status, capital, and the city of their dreams.

Gutted, rehabbed, and abandoned. This classic Chicago greystone building dating to the Gilded Age was bought, gutted, and rehabbed like many in West Garfield Park awaiting the arrival of a white market that was slow in coming. Despite its new windows, new gate, new fixtures, and tuckpointing, once it was offered to sell and rent at prices unaffordable to local residents these buildings remain empty and boarded up (photograph by Jesse Mumm)

The Balkanization of Humboldt Park. This map provides a cursory illustration of roughly where white newcomers and members of the real estate industry designate portions of the area by any term except “Humboldt Park,” using labels associated with gentrification and with whiteness. The boundaries of the neighborhood as outlined in dotted black lines more closely correspond to designations shared among the Latino majority (image by Jesse Mumm)

This factory loft conversion embeds the “West Bucktown” neighborhood name in its building title along with the address number on West Moffat. This reinforces the association of this property with the invented title of Bucktown as it applied to the gentrified area to the east of Western, rather than the name “Humboldt Park,” despite its location approximately two city blocks north and two blocks east of the park itself (photograph by Jesse Mumm)

According to the folk explanation of gentrification, first the gentry arrive, then they vastly improve the built environment, and then property value steadily rises. The evidence from this ethnography, the visual scan, Cook County Assessor’s Office data, and the census shows instead that in Humboldt Park, steady housing improvement preceded the mass arrival of white newcomers, which then spurred a massive and generalized inflation of property value (image by Jesse Mumm) 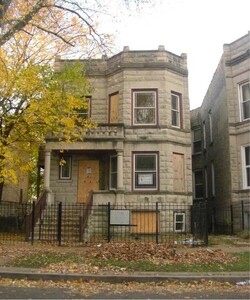 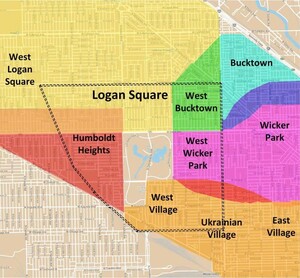 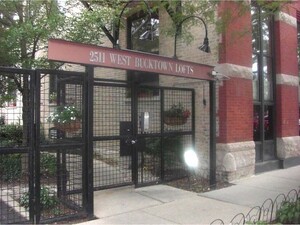