On containerizing maritime piracy and being good men

Just as containerized goods appear to flow seamlessly across the planet's oceans, internationalized and standardized certificates present seafaring labor as uniform and seamless. But underneath these certificates are the intimate and unequal entanglements of local masculinity norms, age, and kinship ties that sustain the maritime labor supply chain. In this article, we follow how three young, male seafarers from eastern India find ways to contain piracy risks at work and poverty risks at home, and their sense of obligation as men, sons, husbands, and fathers. By delving into the unequal conditions for industrial male workers from the Global South, this article demonstrates how containerized maritime labor commodities are not uniform but are dependent upon economic inequality and intimate kinship ties to be productive.

Photo of the footpath leading to Dulal and his family's home. Source: author. 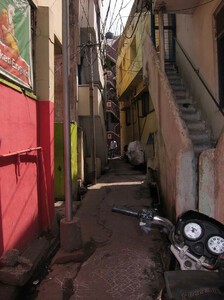