In recent decades the number of domestic reindeer stock across indigenous communities in the Siberian taiga have fallen dramatically. While this has been viewed as a crisis, this paper discusses how reindeer herders are adjusting their traditional herding strategies to modern conditions. A methodology of contextualization is used to evaluate five reindeer herders’ communities situated in different regions of Eastern Siberia. Changes in Siberian reindeer herding are analyzed according to three main types of contexts differing as to the period of their formation: a) traditional contexts that pre-existed the Soviet system, b) contexts formed in the Soviet time; and c) contexts created by post-Soviet reforms. Under modern conditions reindeer stock reduction is important relative to the economic context, but the role of reindeer herding in cultural and political contexts is increasing. The slow formation of “buffer” social contexts makes the taiga reindeer herding communities’ condition vulnerable.

Bread baking in nomadic camps of Komi-Izhemsts and Nenets reindeer herders’ communities. Tundra of Kanin Peninsula. Photos by the author, 2007. 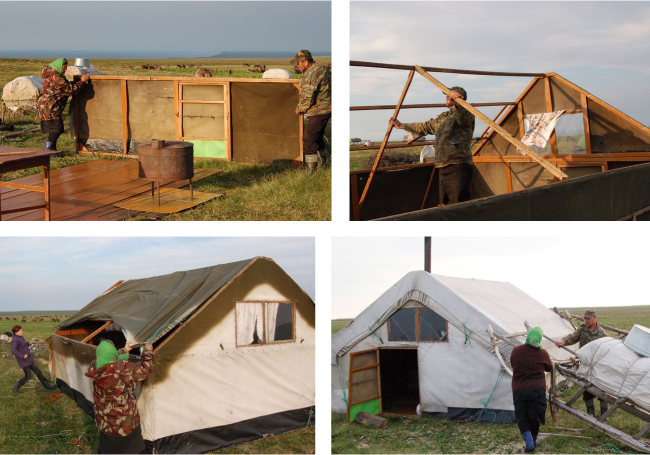 Construction of mobile dwelling invented by Kanin reindeer herders in the 1970s and named palatka. Photos by the author, 2007.