Chance Favors Those in Motion 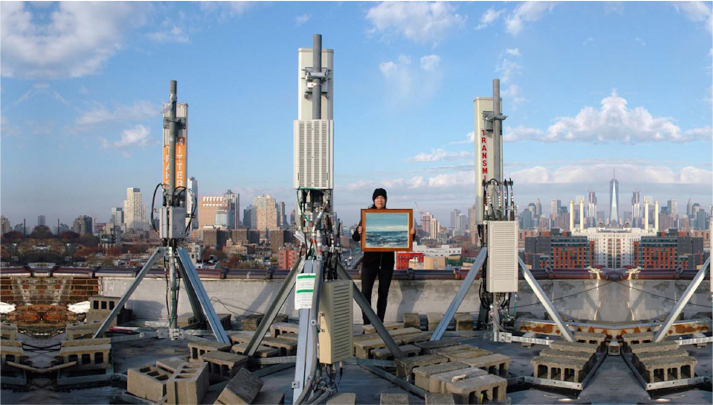 Waaschign is a word used for window from the Anishinaabe Nation language, my mother’s indigenous tongue. In this image, I copy, flip, slide, and paste to create a background that in sections mirrors itself to alter perception.

In this self-portrait, I hold a painting of water depicting Georigan Bay in the Muskoka, Parry Sound, region where I am from. The painting is by my mother, and on it, the water’s horizon matches to line up with the city’s. The image is recognizable as a Brooklyn rooftop at sunrise with the Freedom Tower, New York, in the background. Surrounded by cell phone/Internet transmitters, the human body becomes a beacon transmitting an intergenerational negotiation of space. The banner is waved, rolled, and folded in performance. 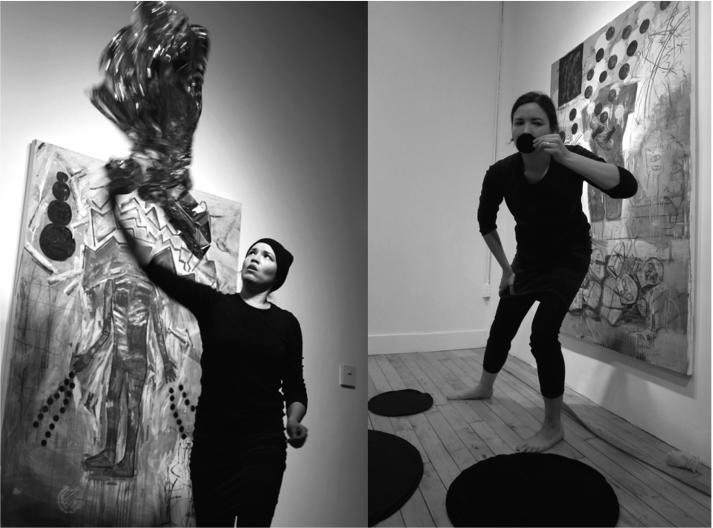 All Is Moving, Black Ice and Shock and Awe. Performance, 30 minutes, 2013. Photograph by Jason Lujan. In conjunction with the exhibit Water and War at the Accola Griefen Gallery, by Jaune Quick-to-See Smith, one of the most acclaimed Native American artists.

I respond to six works in the exhibit using items carried and produced by me. Items include a gray bag for rolling in, five felt bundles containing jingle gloves, a set of seven black velvet circles, a silver Mylar survival blanket, a bag of candy, my signature wooden tokens, a “Manifest Destiny” T-shirt, and a bottle of water. The title is from a published poem by Quick-to-See Smith.

When not performed, this item is displayed as sculpture in a gallery hanging over a tube or draped over a stand in reference to the body. Closing a circle is a return to the point of departure. A spiral is never ending; it is always moving. 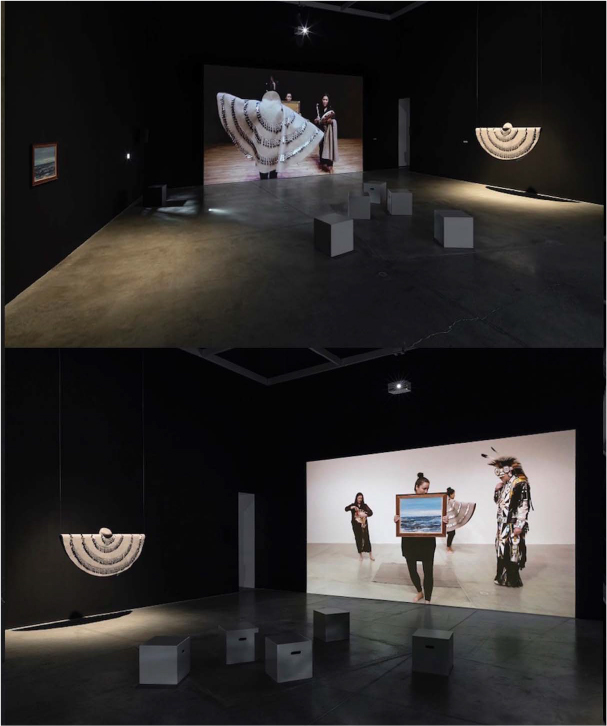 The One Who Keeps on Giving. Commissioned installation with audio, north and south walls, 20 × 15 inches, 2017. Photograph by Henry Chan. Alternating video projection loop on facing walls. The video is one long shot with performers moving around the camera. South wall video is of a public performance at the second annual Gchi Dewin Indigenous Storytellers Festival, the Stocky Center, Parry Sound, and the north wall is a private performance shot on-site at the Power Plant in Toronto. Hand drum singing, grass dancing (a style of modern Native American pow wow dancing), a video filmmaker, and the felt Jingle Spiral on loan from the Gallery of Contemporary Art Montreal are seen in conversation around an oil seascape painting of Georgian Bay painted by Peggy Miller. Performers include Paul Cowen and my siblings Johna Hupfield, John Hupfield, Deanne Hupfield, and Maria Hupfield. The title of the exhibition and the new commission is an English translation of my mother’s Anishinaabe name. The One Who Keeps on Giving is a radical act of unity and visibility. Together we stand in solidarity to share the skills that we acquired as adults with each other and our community both locally and beyond. 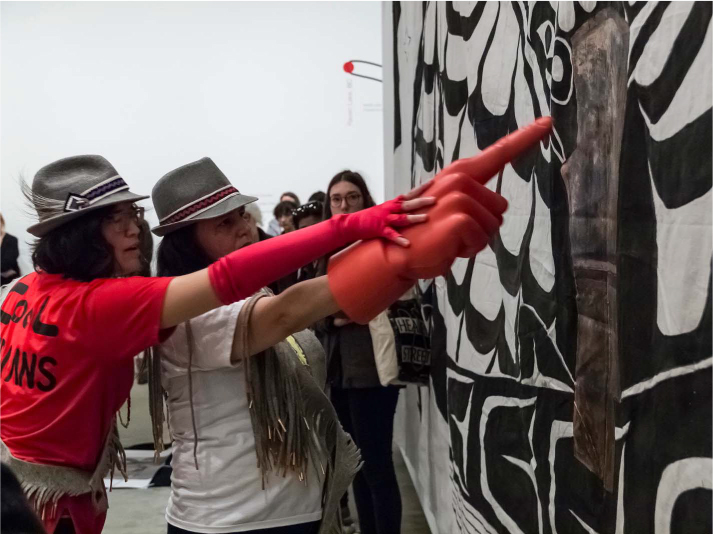 Charlene Vickers and I have collaborated for the past ten years. We stand together in solidarity and nationhood as Anishinaabe sisters. We live in different cities on different coasts, so we must travel and create opportunities to create our work.

This ongoing commitment across distance and kinship ties has built a non-competitive system of support with a foundation in trust. When we perform together, I feel her strength and care. Our work is complementary. We use everyday contemporary materials to create and navigate unexpected visuals that reflect the absurd reality and complexity of the times. 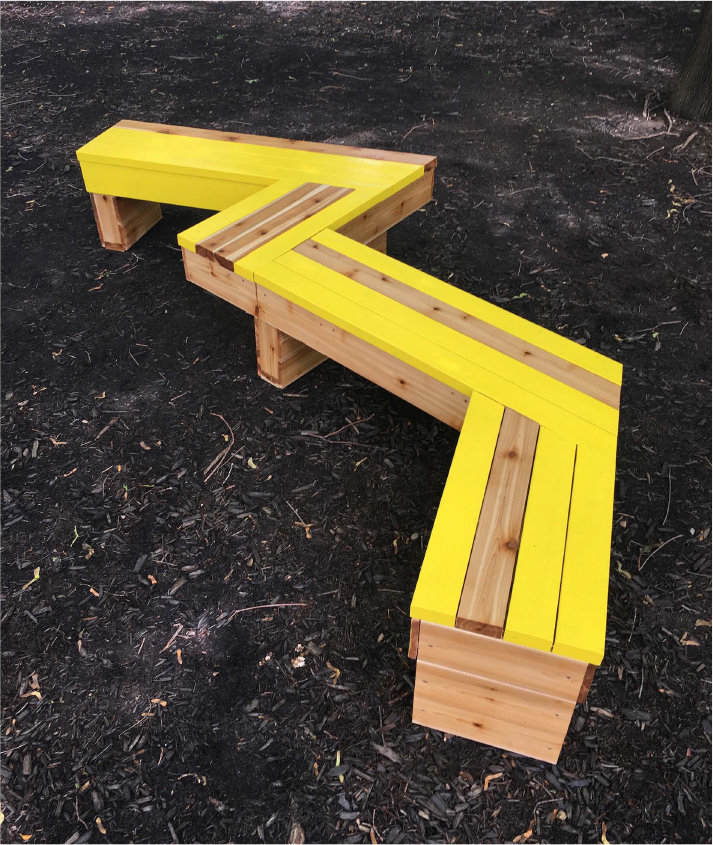 KA-POW! 10 × 18 × 18 inches, cedar and yellow paint, 2017. Photograph by Cheryl Sims. The word “KA-POW!” speaks the language of action, force, contact, movement, and sound. KA-POW! is comprised of two seated bench areas fixed among a grove of trees at Victoria Square park in Montreal, Canada. Referencing lightning bolts, geometric star blanket patterns, and cartoon action text bubbles, the benches are a radical act of unity to bring more integration of public spaces with the natural world. I created this site-specific commission to center trees as a dynamic life force and living beings to bring people together at a busy intersection. Public spaces create and enforce a hierarchy of colonial power dynamics with each other and connections with the natural world. 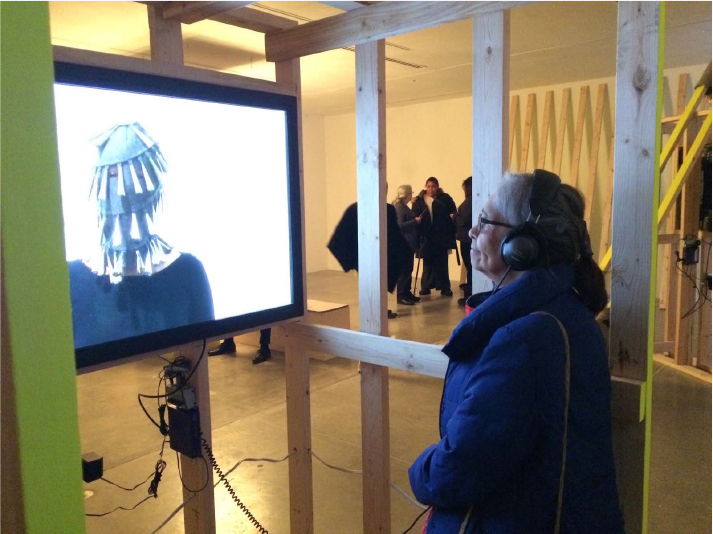 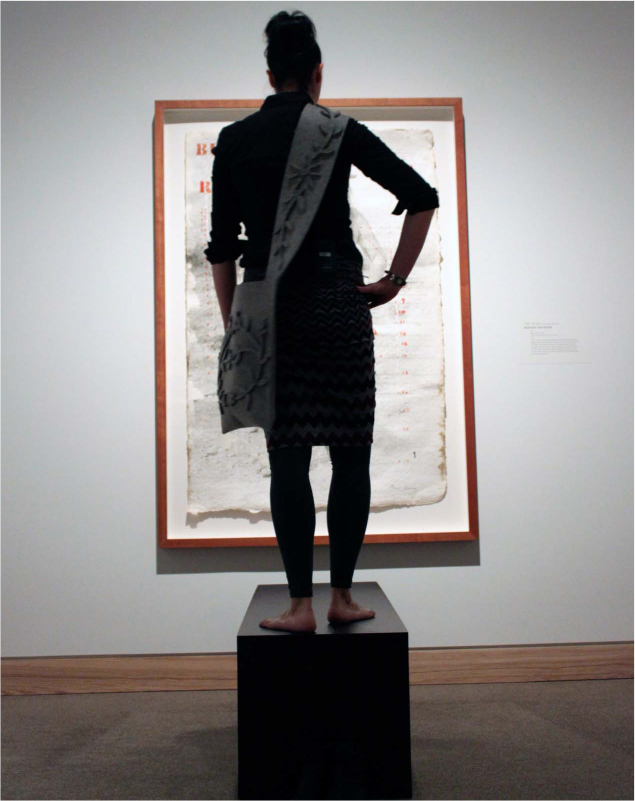 Artist Tour Guide, three 30-minute performances, 2013–2014. Photograph by Jason Lujan. Commissioned by the Smithsonian National Museum of the American Indian in New York. Three scheduled performances that respond to and intervene in the exhibition Before and After the Horizon: Anishinaabe Artists of the Great Lakes through sound and action lead by an artist from the show to assert a dynamic physical, living presence in the gallery. I guided three tours over the duration of this exhibit. This was a work in progress; each tour informed later ones, creating a living, ever evolving art experience that is the essence of this performance. For Artist Tour Guide, I created a set of objects that I wear, carry, and activate throughout the performance. In this image, I stand on a bench in front of a print by Carl Beam, A Self Portrait of the Artist in His Christian Dior Underwear, to assume the pose of the artist, look him in the eye, and walk up to read the handwritten text. 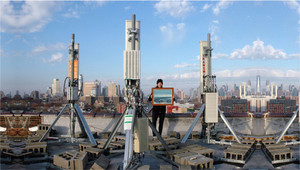 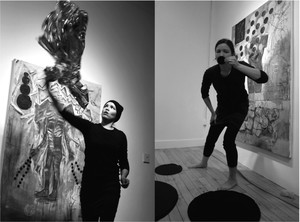 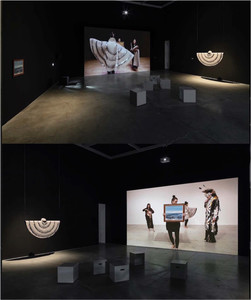 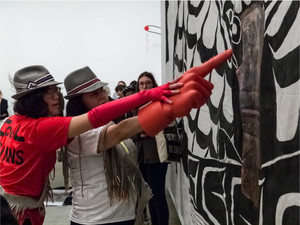 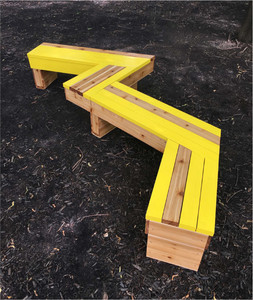 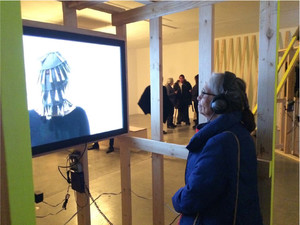 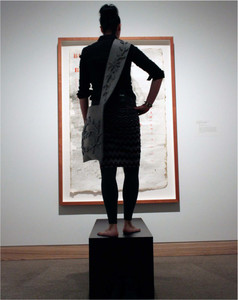