Shivering from top to bottom, we huddle on the narrow sidewalk outside Participant Inc. gallery on Houston Street in New York City. We are masked. As safely as we can manage from the global flows of COVID-19 (because of the virus, regulations in the city necessitate innovative solutions to the prohibition on crowds congregating inside). We are waiting for the three-part performance by Ron Athey and collaborators Hermes Pittakos, Mecca, and Elliot Reed—Performance in 3 Acts—which is staged in relation to the exhibition I curated Queer Communion: Ron Athey, a retrospective of Athey's now over thirty-year performance art career.

Shivering from top to bottom, we huddle on the narrow sidewalk outside Participant Inc. gallery on Houston Street in New York City. We are masked. As safely as we can manage from the global flows of COVID-19 (because of the virus, regulations in the city necessitate innovative solutions to the prohibition on crowds congregating inside). We are waiting for the three-part performance by Ron Athey and collaborators Hermes Pittakos, Mecca, and Elliot Reed—Performance in 3 Acts—which is staged in relation to the exhibition I curated Queer Communion: Ron Athey, a retrospective of Athey's now over thirty-year performance art career.

Popping inside briefly to see how the arrangements are going, I see the vitrines covered over, large props and objects moved aside to accommodate this live event—inconvenient, but an essential move to sideline the archival documents, photographs, and props and costumes to make room for living bodies performing in the ever-expanding canon of Athey's oeuvre. Glen Fogel is the video impresario who films the interior view of the performance and works in real time to edit multiple camera angles, projecting the video simultaneously through the front window of the gallery (which forms a huge screen, almost the entire façade of the space). He asks me to film the outside projected view with my iPhone. I agree, take a tripod, and resign myself to missing the direct view of the live event—to which only a handful of tech people and Lia Gangitano, the gallery director, are privy.

Moving outside, I return to the select group of queer performance fans standing in the cold, waiting, while a cut-up version of Genesis P'Orridge's Esoterrorist text (borrowed by Athey in collaboration with P'Orridge before her death) is projected through the front window. Anticipation mounts. I am not sure what to expect with this COVID-friendly arrangement, which I assume will be disappointing in contrast to the vivid energies of being in a room with Athey performing live.

With the first of the 3 Acts, Elliot Reed performing a solo word action, I am wondering anew about the limits of this COVID solution because we cannot hear the words outside. However, it quickly becomes apparent that the energy of the bodies performing behind the glass front of the gallery vibrates to the outside via the vivid footage being projected through this ephemeral wall. We do not need the audible words, as Reed hovers like a hologram in our field of vision, sometimes in full view, at others cutting to a close-up side view of his face, reading. Reed is an intense and tightly wound performer, whose work I first saw a few years ago at the legendary Patrick's Cabaret in Minneapolis where Athey and his troupe had performed 4 Scenes in a Harsh Life in 1994 to the opprobrium of far-right critics in the US government. Athey and I watched together as Reed performed in homage to Athey at this twenty-five year anniversary of the 1994 event. Here, in New York in 2021, Fogel's brilliant on-the-spot editing of video from multiple cameras produces an equally electrifying, if differently manifested, bodily experience from that of engaging Reed directly in the same space. The vehicles passing noisily on the street behind us, the icy wind whipping past, the pedestrians walking on the sidewalk and briefly blocking the view, become elements in this real-time experience that, in the most interesting way, begs the question of whether this is a live event or not.

Reed picks up his microphone and walks off left. The second act begins as the judas cradle (a prop from Athey's 2004–2005 Judas Cradle) and “holy woman” dress (from Athey's mid-1990s performance of 4 Scenes) dazzle our view and performers begin “Pistol Poem: Brion Gysin's 5 x 5 1960 sound piece, choreographed for four.” This vignette is drawn from the beginning scene of Athey's recent Acephalous Monster, a gorgeous multipart performance exploring the regimentation and ultimate annihilation of the body under totalitarian regimes (via the visceral image of Louis XV's decapitation, with the executed king played gruesomely by Athey himself). In “Pistol Poem,” the stomping of the four performers is audible through the wall and window of the gallery, as are shouted numbers regimenting their actions. The tensile spring and foot-slapping of the bodies moving asynchronously across a checkerboard drawn on the floor in goosestep-like movements is chilling on another register from the arctic air outside.

Finally, the performers leave, the lighting shifts to reveal assistants moving around the space to put up two clotheslines in a “V” shape, leading to what is apparently a barber's chair, under the spotlight. Athey then enters to lie back in the chair, his full body tattoos clearly marking him out as a body artist as well as performance artist. A co-performer (Pittakos) puts on rubber gloves and moves in to cut Athey's chest in a minotaur shape—through Fogel's virtuosic camera work and real-time editing of the footage, we “outsiders” are privy to radical closeups of Athey's head and chest, as well as to overall views. Stacks of paper towels provide blotting papers for the blood oozing from the cuts, producing visual images (art works?) each of which is hung on the clothesline, which is on a pulley so that the paper towel blood pictures are moved toward those of us standing out on the street. This vignette is a new version of the infamous “human printing press” from 4 Scenes in a Harsh Life—the very scene that called forth the apoplectic rage of Jesse Helms and the police of the first culture wars in 1994.

Separated by glass, which functions as wall/closed door but also as screen for these dream images, we watch Athey and all perform live, exploding with intensity, even via the separating glass of “social distancing” required during COVID times. The parts of the performance themselves are stunning and provocative, but the COVID solution if anything makes the event more profound in that points not only to the costs of trauma but also to the pleasures and dangers of the vulnerable body (both key themes of Athey's work as a whole). It reinforces the fact that COVID social distancing, if nothing else, reminds us of the dangers of bodily flows. As I experience it, the performance is definitively not “not live”; rather it manifests as life/liveness in mitigated form. A perfect metaphor for COVID times.

The Journal for Global Practices in Live Arts Curation 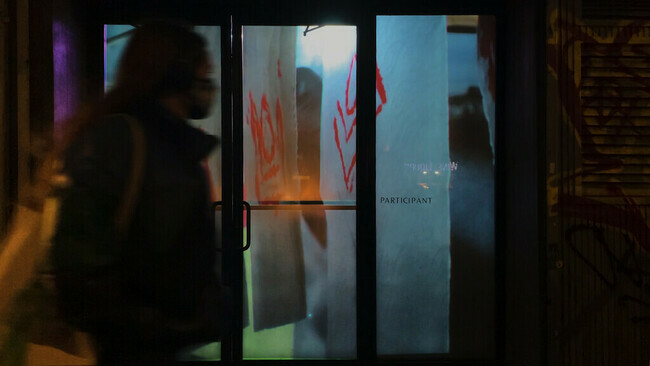 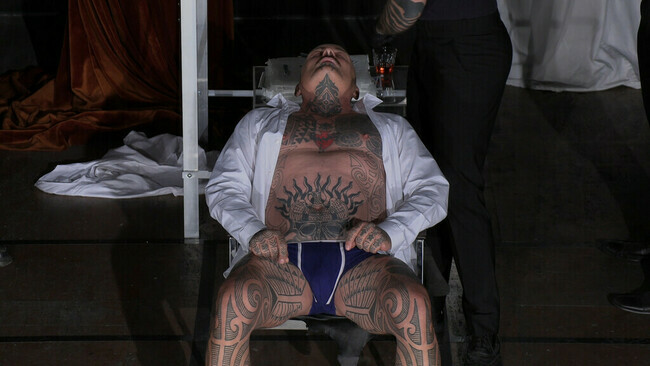